Initiatives for Women in Leadership

This is how companies can take on a leading role

The proportion of women in top management positions is still alarmingly low in Europe and especially in German-speaking countries. To change this, initiatives are needed at various levels. In this blog, I focus on businesses and how they can actively contribute.

This is what awaits you here:

1. Women in Leadership – an international comparison

2. Support Women in Leadership Positions. This is how companies can do it

3. The Top 5 initiatives for more Women in Leadership Positions 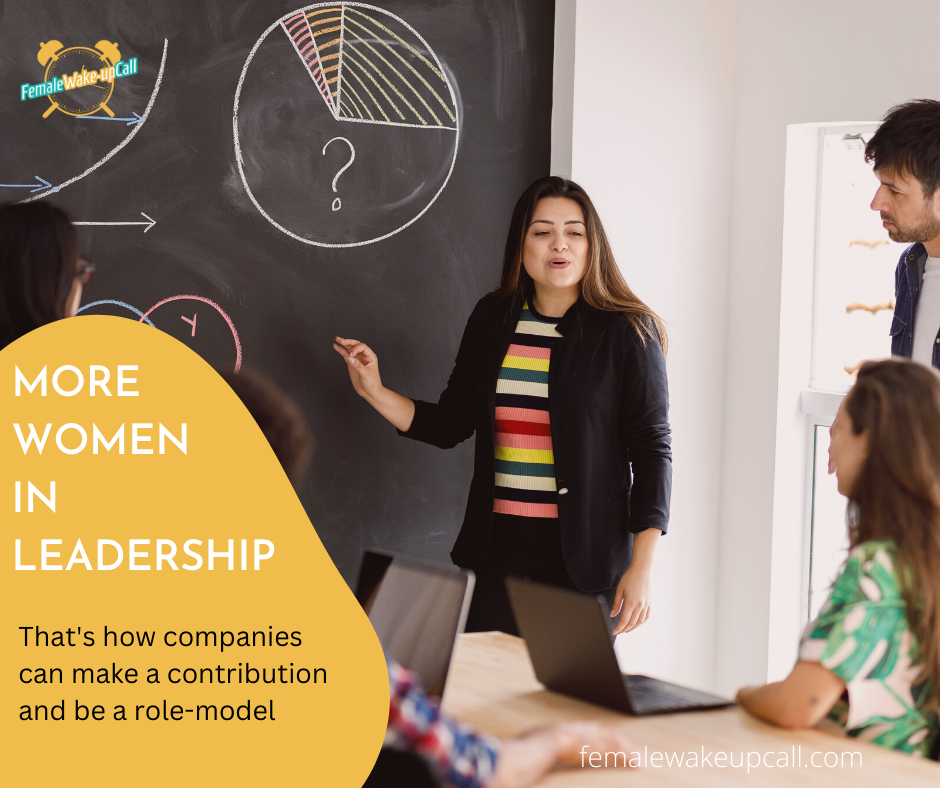 1. Women in Leadership – an international comparison

You know it, and I know it too: We all tend to think that men and women have equal rights and are treated the same way. Unfortunately, the reality is different. Unequal opportunities between men and women prevail in both professional and personal life, and there is still so much to do. According to studies, however, it will take more than 100 years to achieve gender equality.

This is underscored by the recently released Gender Equality Index 2022 data, which assessed the following categories:

The EU average index for gender equality is 68.6 on a scale of 1 to 100 in 2022. Austria takes a score of 68.8 and Germany one of 68.7. In other words, there is still a lot of room for improvement, especially in the “power” category. Because although improvements have been made in recent years, it is still a fact that men outnumber women in positions of power and there are comparatively few women in leadership positions. Austria, for example, has a score of just 51.7 in the “power” category, while Germany has a slightly higher score of 64.8. In both cases, however, there is still a great deal of potential for improvement. (Source: EIGE)

Sweden is a role model in terms of gender equality and women in leadership positions. With an average score of 83.9, the Scandinavian country has a top positions compared to all other EU member states, once again demonstrating its pioneering role.

Dear companies, it is time to start now.

To make leadership positions possible for women and mothers, numerous initiatives are needed – at the individual, societal and corporate levels. In this article, however, I would like to focus primarily on circle of influence of companies. So this post is for everybody working in a company environment and want to make an impact there – let it be Top Management, HR, Diversity or something else. After all, where, if not in companies themselves, it is most effective to offer women more opportunities in management positions.

The good news, the topic is currently on everyone’s lips and 80 percent of all EU citizens are even calling for measures to finally put gender equality into practice. 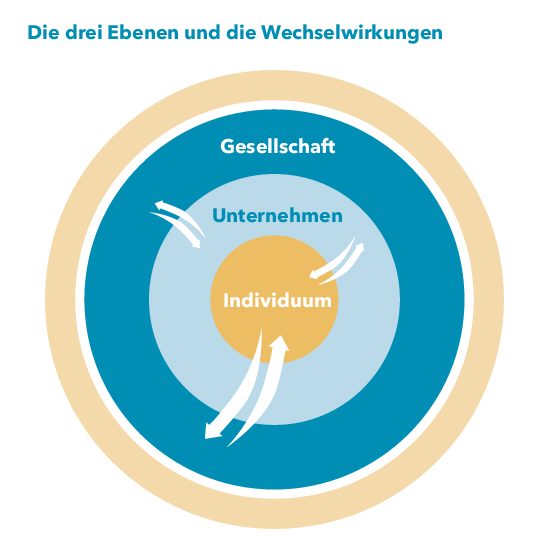 2. Support Women in Leadership Positions – this is how companies can do it.

In most companies, there is already a great awareness for diversity, equality and women in leadership. That’s a good. and it’s either HR, Diversity & Inclusion, or another department that is responsible.

Successful companies with a high percentage of female executives and diversity have awareness and focus on the issue and are working on internal processes. Clear targets are also helpful.

Here are a few of the top measures that are implemented in companies and lead to the desired success.

In this context, it is important to me that it always depends on the industry and the employee and age structure in the respective company which initaitves and measures ultimately lead to the success.

A tip for you:

This article appears as a result of my new format Lunch&Learn. Once a month, I will give you 60 minutes of valuable practical tips from the areas of mindset, personal development and business – short, crisp and compact during your lunch break.

Sign up here to be part of the next Lunch&Learn. There are exciting topics again in 2023 🙂

3. The Top 5 Measures for more Women in Leadership

Create an awareness in your company that gender inequality has no place in today’s business world and also work focused to close any gaps. Awareness and sustainable focus on the issue are a prerequisite to success.

To move toward gender equality in the first place, concrete processes and structures are needed on a company level.

At present – and this is often a blind spot in companies – women are often facing disadvantages in application or promotion processes. Women are less likely to be invited for interviews and often face a glass ceiling in internal promotions without transparent processes.

Companies that are committed to gender equality, on the other hand, work with transparent processes where it is clearly communicated how many men and how many women MUST be on the promotion list. The aim is to achieve a 50:50 ratio, or a ratio that corresponds to the proportion of women and men in the company.

Of course, this is not the only way. For example, I also know companies that align their processes differently. One, for example, directly addresses women who would be a fit and encourages them to apply. On the one hand, to increase the quota of women in management positions and, on the other hand, to take away women’s fear of not being good enough. The success proves them right.

How a company implements internal processes has a major impact on women’s careers. As an example a normal job posting can be written to sound more attractive to women. The same applies to qualifications. Headhunters usually look for “masculine” qualities. Studies show that women outperform men in 13 of 19 leadership competencies. (Source: https://hbr.org/2020/12/research-women-are-better-leaders-during-a-crisis)

In addition, it is important tofind new ways to recruit women in leadership positions for your company and do not rely on the classic ways of “friends recruit friends”, but implement transparent application processes and hearings. Furthermore, all HR managers should have taken a look at their own Unconscious Bias to become aware of their own prejudices and way of thinking.

Parental leave management also plays an important role in terms of processes and structures. This already starts with raising awareness among young employees (women and men!!!) who are still childless and have therefore never come into contact with the topic.

I recently gave a workshop to a group of 15 women under 30 – they all felt it was their job to figure out how to balance child and career. When I heard that, I was just speechless. For me personally, the belief:

“The division of childcare and household chores between my husband and me is 50:50”

was indeed a huge change in my attitude and mindset.

Once an employee’s pregnancy is known, additional processes are needed to favor an unbiased mindset and balance the different needs. How do managers and collegues deal with a pregnant woman? What information is already needed at this stage to break down traditional role models and encourage parents reach their professional goals AND be a parent?

If the employee is on parental leave, structures are needed to maintain a good relationship between company and the parent. This includes stay-in-contact programs as well as invitations to company parties or a regular family breakfast, where colleagues on parental leave and their kids come to visit.

And after the baby break? What is needed now is active listening, career talks, coaching and mentoring so that the return to work is successful and women actually have the confidence to take on management positions despite having a child.

How a company handles the process of pregnancy, parental leave and return to work has a major influence on how the issue of equality is handled. Mothers are usually among the most loyal employees if this process is well managed and the employee is treated with appreciation.

Everyone has a private life in addition to their job, and for most people the family plays an enormously important role – of course. That’s precisely why flexibility is more important than ever these days, especially if you have children. Because career and family is and has to be possible, even if you are a man or woman in a leadership position.

The basic prerequisite for this is, of course, that you as a company place great emphasis on flexibility. Today, it is possible for a woman to work 30 hours a week, with two long days and two short days, without any problems and in many companies this is absolutely not an obstacle to the career of women in leadership positions – neither in Austria or Germany nor elsewhere. And it should be the same for men.  Many women currently live this work concept and it is possible – with flexibility for work.

And maybe at some point it could be the same in the German-speaking countries as it is in Denmark. In fact, about 7 or 8 years ago, the then Danish Minister of Family Affairs said that if a man’s resume shows that he is a father, but he has spent little time at home with the family, it is considered a disadvantage.

The pandemic has shown us the way, and now it’s up to you to continue the flexible trend wave. Just because someone has a family at home and isn’t in the office from 8 a.m. to 5 p.m. every day doesn’t mean their career will suffer. So to make working life more attractive for women in management positions, flexibility and the option to reduce to part-time are among the top priorities.

Here is another blog on leading part-time – because working part-time has pros and cons and should be considered wisely.

How can I, as a woman, be an authentic leader who shows up her way in a business environment?

Many companies and also women are looking for answers to this question – for a better working world of tomorrow, where women can contribute their skills, and their talents are also seen and appreciated. This makes it all the more important to encourage women for leadership positions and to accompany them when they have to show up as being often the only woman in a team. In fact, studies show the following: If more women sat at the negotiating table, the results would be more peaceful and sustainable.

Encourage women to be bold because they will enrich your company with numerous skills. For the simple reason that women think differently than men, and that’s a good thing. Women in leadership positions bring momentum to the board level if they are supported in making their voices heard.

The proportion of women in management positions in Austria, Germany and the rest of Europe is still alarmingly low. To change that, companies need to make changes in their mindset, structures and processes to break the current trend and move forward.

Here is a checklist with all the important points for your company:

If you start making changes, other companies will follow your example and make the future more successful for everyone.

80% of EU citizens believe that companies should implement initiatives for more gender equality. Only a small proportion are opposed to new inititiatives.

A clear sign and WAKE-UP CALL for all of us!

The good thing is that women are attracted to companies where there are already many women in leadership.

Good luck with the implementation process!

What is the current situation in your company? Are there already many initiatives in place or are you still at the beginning?

Please feel free to contact me. Tell me about your current challenges and we will develop a strategy for your next steps – for more women in leadership positions in your company ! 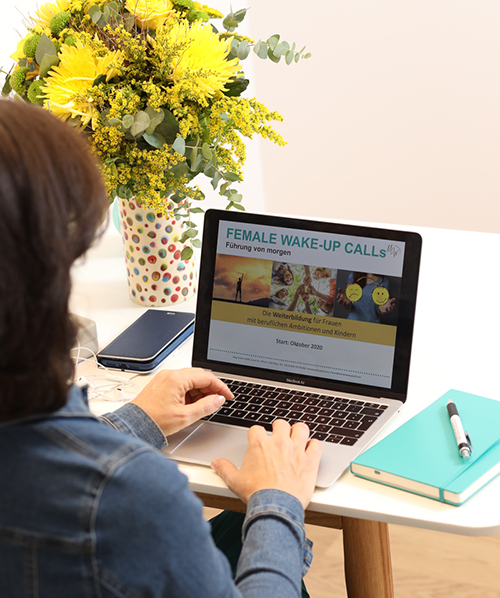